Accept drafts to your story 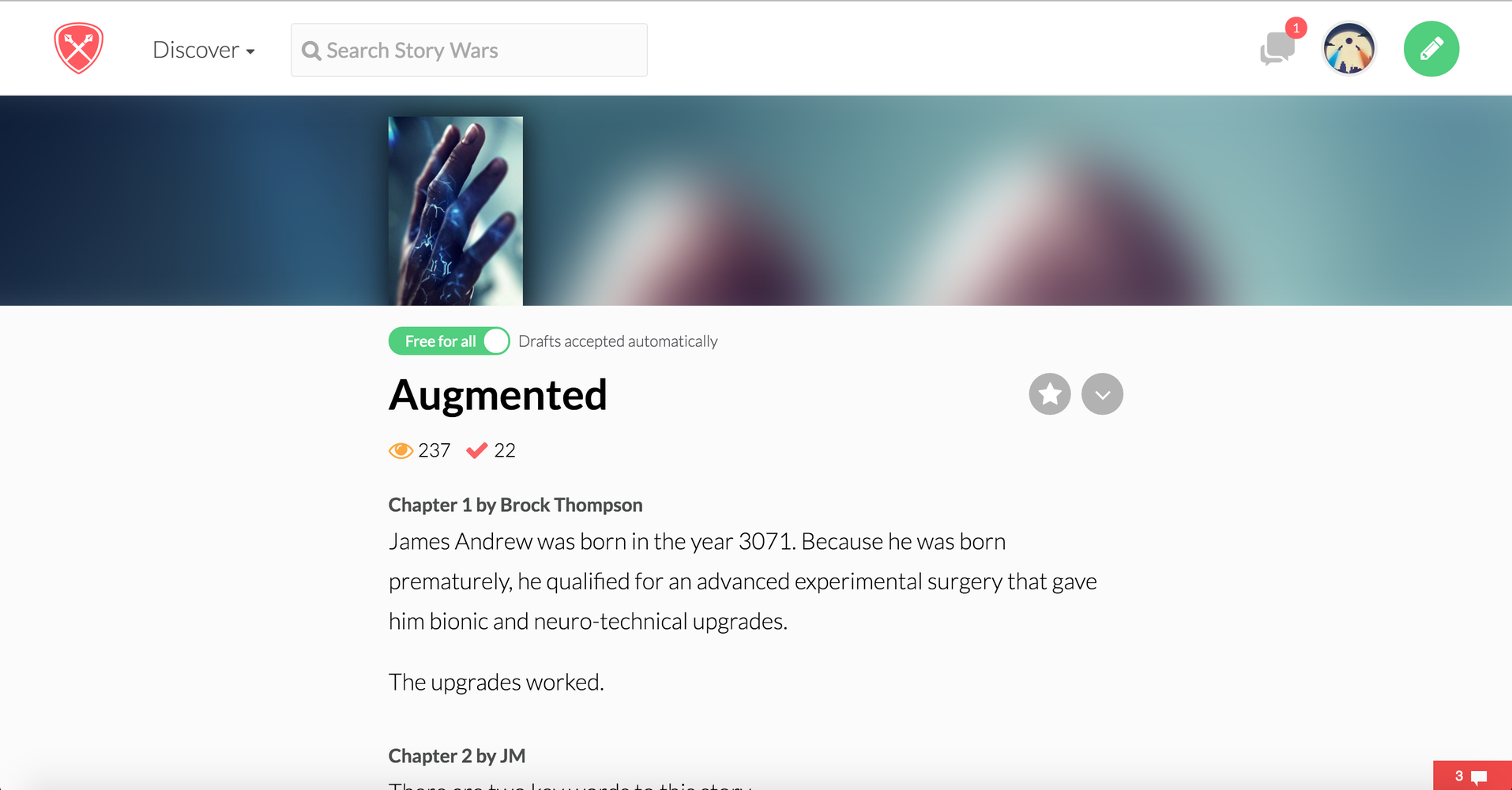 Choose if a story should accept all drafts automatically or if drafts need to be accepted first.

Hi Joakim: I like this idea; I like having some control over my stories and I'm sure others will agree. Good job. THANKS!

It's going to be a bit of a challenge to implement but I think this is the way to go. It lets the trolls play around in the less serious stories.

I like it.... 'trolls' although some people might get offended by that word, but as the expression goes 'If the shoes fits'...Hope you're doing ok :))

Well for me a person is an obvious troll when there is a serious story going on and then just goes in and write a line to destroy it. But of course, not everyone sees it like that :)

That would be nice!

It definitely irritates me when that happens. It kind of 'throws you for a loop'...and your left thinking WT?

There are a few issues that I haven't solved in my head yet.

Say that you draft for a story that has moderation on. Should you get notified that your draft has not been accepted? Do you want to know why? It feels like a double edged sword. The alternative is to just get notified if your draft is accepted so you celebrate the good and not the bad.

I think it would make it easier on you, as far as having to do more changing, if we just got notification that our draft was accepted. If we went the other way (knowing why it wasn't accepted), could perhaps start an 'all out war' so to speak (feelings hurt, being 'unfollowed' as a result, negative gossip among the SW members who have their own little writing group, etc). But on the other hand, if my draft wasn't accepted, and I felt it was appropriate for the story, I would want to know why, and it would drive me crazy 'NOT' knowing why. Double edged sword indeed.

I think, just accept all the drafts as usual. When voting starts, report the writers who are writing "spam". The offender would be given 1 warning then kicked off if repeated. No one would know who reported the offender and the offender would only be notified by the "Bid KaHuna"

I agree with Kathy, it could possibly start rivalries or hatred between writers and that is one of the key things we would want to avoid isn't it? JUst telling us that it was accepted could avoid all that hatred.

I think this is a great idea.

I like how you used Brock's story for this. :

I think that it will push us to write better drafts so we wouldn't get the pesky message saying that youre draft didn't get picked. I say its a good idea.

would you be able to switch it on after someone had already drafted? or switch it off? because that might cause some issues. or people like me who would use the feature to read all the drafts but switch it off so it doesn't matter.

would a disapproved draft be deleted from the story? how about if you switch it back to the free for all mode, would it return?

there's definitely some strong consideration here. but it seems like an interesting feature.

Great points 'R' that I don't think anyone thought of!

I believe that the control over stories is an amazing idea, but I also believe that if the story writer rejects the draft she/he has to make a good reason behind it like, no trolls, grammar/spelling, or other.

(PLEASE READ THIS ALL!)

As much as I think that this is a really good idea, I have a few problems:

1. If your draft is rejected, does the author have to provide a reason?

1.1.2. For that matter, can the same happen to authors of drafts that have been rejected for the former reasons ("don't like where it's going", "don't like the storyline", etc. )?

1.2 If they don't, can rejected authors object?

2.1. What happens if multiple drafts are rejected and there is no draft that has been approved?

3. If say, for example, I go offline for 6 months, what happens to the story?

4. Do all the authors of the story get to vote? Because if, for example, someone had written 6 chapters on an eight chapter story (who wasn't the original author) wouldn't it be a bit unfair (understatement) if they didn't get a say on who wrote the last draft?

4.1. Should it be the author who contributed the most?

4.2. Should it be essentially another round of voting whether the draft should get in? The authors of the story each get a say?

4.2.1. Should each author get an equal vote or should they get an amount of votes representing the amount of chapters they have written?

5. If authors get to approve/reject drafts, couldn't they just reject drafts until he finds his draft, and then just approve that? That would be unfair to other authors who did deserve to win, but were disregarded because the original author wanted their draft?

(THANKS FOR READING THIS ALL)

I am NateDaFirst and I approve this message

i agree with belgwen on some topics

I totally agree with this. You should totally do it. It may hurt other's feelings, but they would know that they need some practice with writing. This is absolutely agreeable on many terms. Great idea, Joakim!

Does Story Wars already have this update or are you waiting to change it? Because if it has already been updated mine isn't like this... I don't think or haven't seen yet.

In (at least) one of my stories, there has been a spam draft, and the other draft (there were only 2 submitted) I didn't exactly favor. I still can't find out how to activate this, so I'm questioning whether it is real or not. If it isn't yet, that's fine, but in the future I hope I'll find a way to activate this!